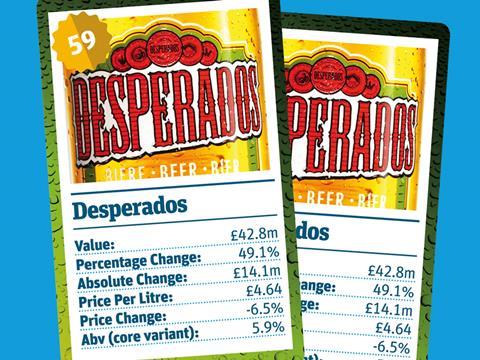 Two years ago, it wasn’t even in the top 150 - Heineken’s pioneering spirit beer (‘speer’ to those in a hurry) has bounded through these rankings in a manner very much befitting the ‘high energy occasions’ it’s aimed at.

Volumes are up 59.3%, led by the original Desperados, but with significant contributions from the other two variants. The mojito-flavoured Desperados Verde brought in £3.6m in its first year on the shelves, while Red managed sales of £1.1m - despite only being available since March.

Average prices have fallen 6.5%, but the brand still fetches a massive £4.64/litre - more than twice as much as any of the top five lagers. Heineken off-trade MD Martin Porter believes the rapid growth of the brand can be sustained.

“The challenge with Desperados is to continue to drive interest,” he says. “I can see the growth being continued, but it will have to be through relevant pack sizes, or new products coming with the Desperados heritage - that could be through different flavour profiles.”

But he sounds a note of caution for the emerging sector: “What you can’t afford is for the fad element to creep in through over-proliferation of other brands coming into the market - which through their limited quality could harm the category in the long term.”