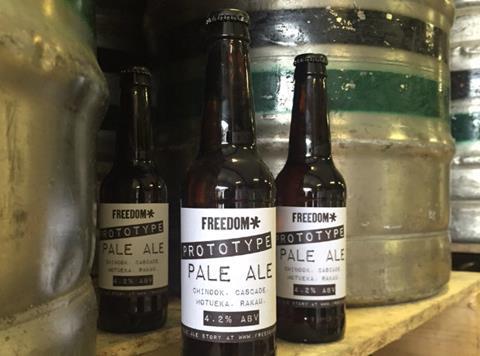 Freedom Brewery is extending its range of sustainably brewed, vegan-friendly beer with the addition of its first pale ale, which will be crowd-sourced for quality before its official launch.

Available now at 35 Mitchells & Butlers Castle sites along with 65 independent trade outlets, Freedom Pale Ale has been soft-launched as a prototype to allow customers time to comment before it is officially unveiled, based on feedback, in September.

Shoppers are invited to share their views through an in-store ‘ballot box and comment card’ system, via Freedom’s website, and through social media channels using #FreedomPrototype. Responses will be used to shape the NPD for its autumn introduction.

Describing the NPD as “dry, crisp and aromatic”, Freedom’s head brewer, Jonathan Smith, said the brand’s fans had been asking for pale ale “for some time”.

“We are giving them what we believe to be fantastic pale ale, but we want them to help us refine and develop it over the next few months,” he added.