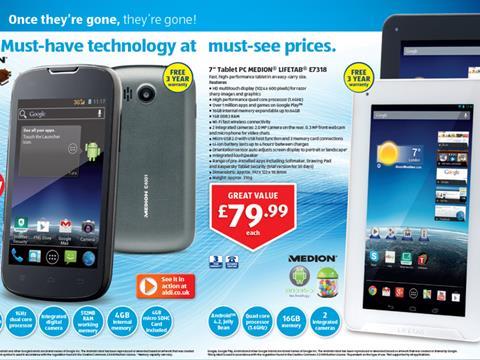 Aldi is selling tablets and smartphones in a flash sale

The discounter is selling the products – all priced at £79.99 – in stores across the country as part of its ‘when it’s gone, it’s gone’ special buys promotion.

The retailer has racked up more than 18,000 likes on Facebook after posting a ‘like to win a tablet’ competition on the social networking site earlier this week.

The tablet, called Lifetab, first went on sale in December 2013 and sold out in 24 hours – prompting some complaints from shoppers who accused Aldi of being misleading about the volume of stock.

This week a spokesman declined to reveal stock levels but reiterated that the tech, like all special buy promotions, would be sold “while stocks last.”

The smartphone and kids’ tablet, all developed by manufacturer Medion, are new to the range and mark Aldi’s first foray into smartphone technology.