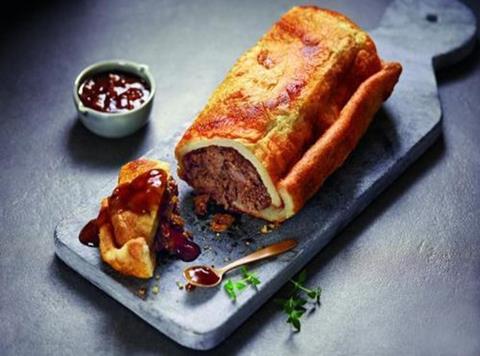 Yorkshire puddings are having a moment. Last week we brought you news of The York Roast Co’s street food-style pud wraps. Now Aldi is adding a ‘world food’ twist, with the new Yorkshire pudding burrito.

It sees a pud wrapped around slow-cooked beef brisket in a mushroom sauce. A red wine and onion gravy gives it more of a Wellingtonian vibe than a Tex-Mex one, but it’s still evidence of an emerging repurposed pud trend. Expect to see them made into protein bars/fidget spinners/environmentally friendly coffee cups before long.

In other era-defining NPD news, Sainsbury’s has launched a range of steaks it recommends adorning with gold leaf (sold separately). In a world where red meat is increasingly demonised, perhaps it has calculated that a touch of tasteless vulgarity is the way to go. After all, the current US president loves steaks and gold, doesn’t he?