Sushi chef is king of the carrot choppers 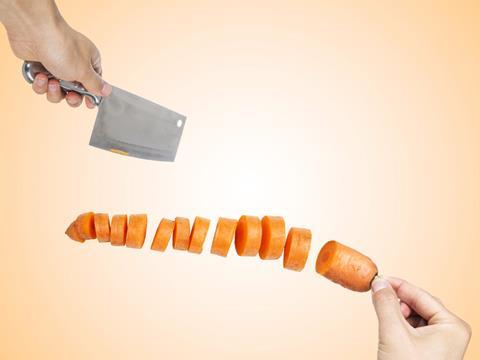 “Dedication’s what you need” - so sang Roy Castle. But there is an easier way to become a record breaker: seek out an obscure/wilfully ­dangerous record!

Last week, sushi chef Hiroyuki Terada did just that, tackling the record for ‘most slices of carrots sliced while blindfolded in 30 seconds’.

Terada was egged on by hand gesture enthusiast and sometime chef Gordon Ramsay, whose F Word show also hosted a watermelon chopping challenge last year. The swear-king told viewers the blindfold was his wife’s (gross), but Hiro somehow managed to keep focus. Cleverly using a really long carrot and super-thin style, he sliced his way into the history books, winning a framed certificate and a kiss from Ramsay as he surpassed the previous record of 50 by 38 slices.

Terada will likely be most pleased by a more important figure, though - 10 fingers.