Most firms think food safety would be unaffected

Concerns that food shipped to and from the UK might be subject to less stringent safety controls are baseless is the consensus in the food and drinks industry, with 65% convinced food safety would be unaffected outside the EU. Ten per cent even believe food safety could improve in the event of Brexit. 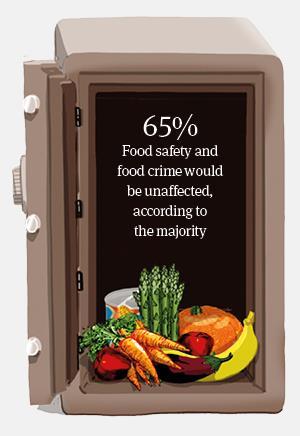 Such a viewpoint may come as a surprise to Remain campaigners who have regularly cited the importance of EU legislation governing food safety as a major reason for the UK not to leave the EU.

But though one professional conceded the EU “created a level playing field” and helped to avoid a “race to the bottom” only 15% felt food would be less safe in a Brexit.

The possibility of more food crime outside the EU also hasn’t registered as a particular concern. While the 2013 horsemeat scandal proved just how international food crime networks were, nearly half (45%) say the risk would not increase, and 17% believe the UK could in fact end up more protected.