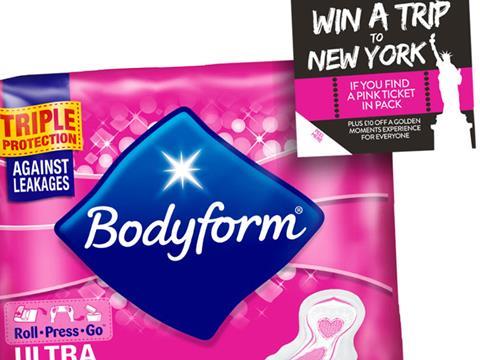 Bodyform is giving away 10 trips to New York in a on-pack promotion, which runs from now until the end of June.

Ten random packs across 10 of the brand’s products will contain a pink ticket, which instantly awards the shopper who finds it with the prize of a trip for two to the Big Apple - including flights from London, a three-night stay, and a choice of sightseeing tours.

Every promotional pack will also include a £10 voucher for website Golden Moments, offering money off a range of experiences, such as days out, spa treatments and flying lessons.

The promotional packs will feature an on-pack ‘stopper’ to attract the attention of shoppers - while the campaign will also be promoted through social media, radio, VOD, shopper media and press advertising.

“The Bodyform Pink Ticket promotion is all about driving fun and excitement in the category, and we want to share this excitement with all of our consumers and retailers,” said marketing manager Janet McQuillan.