Charbrew looks to expand into US through crowdfunding 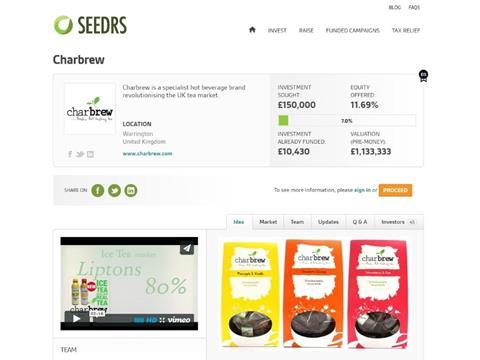 The Charbrew Seedrs campaign on 15 September

Charbrew Tea is aiming to raise £150,000 through a crowdfunding campaign as it looks to expand into the US.

The Cheshire-based business  – which sells fruit teas and ready-to-drink ice teas through retailers including Holland & Barrett and Tesco – is hoping to extend its international reach into North America. Charbrew teas are currently listed in more than 3,000 stores through 20 retailers globally.

Launched on Friday (12 September) through crowdfunding platform Seedrs, the 60-day campaign has been created to raise £150,000 in investment for 11.69% equity.

“Crowdfunding is an exciting way to involve customers and fans who believe in our products and brand to join the Charbrew journey,” said Charbrew founder Adam Soliman. “We are giving fans the opportunity to have their own shareholding in a young and fast-growing company. This investment will mean we can accelerate our growth.”

Soliman started the business in 2009 from his parent’s house with his personal savings.

Earlier this month, English winemaker Chapel Down launched a campaign on Seedrs to raise at least £1.7m. The push has broken that target and currently (15 September) stands at £2.6m.