Colman's and Snaffling Pig team up for crackling launch 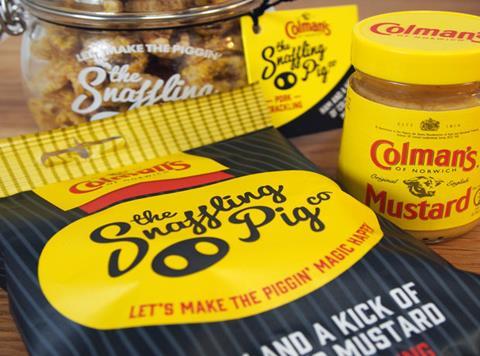 Colman’s is to make its first foray into the snacking category after teaming up with The Snaffling Pig Co to launch a pork crackling variant.

“In the past, pork crackling has mainly been consumed as a snack in a pub or a bar, but we have seen a surge in demand within the grocery sector,” said Chloe Irwin, senior licensing manager at Unilever UK. “We are thrilled to have partnered with the Snaffling Pig Co, such an up-and-coming brand, as well as giving Colman’s consumers the ability to enjoy the great taste of Colman’s in an exciting new snacking format.”

Andrew Allen, Snaffling Pig co-founder, added: “Pork and mustard is a flavour combination that is a gift from the porky gods, so when we decided to make our version, there was only one place to turn to bring the kick we wanted. Colman’s is such an iconic British brand, but it’s also one with a playful edge so we’re incredibly happy to have them join us on our porky venture-adventure.”

Founded in late 2014 by three friends, The Snaffling Pig Co appeared on Dragons’ Den in 2016 and secured an investment with Moonpig founder Nick Jenkins.