Protein shake Everything But The Cow eyes supermarket listings 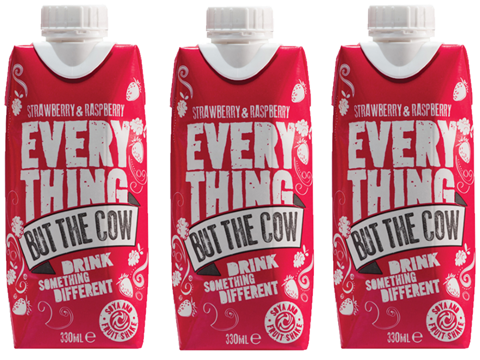 A low fat, gluten and dairy free protein shake aimed at active women is hoping to expand into supermarkets by the end of the year.

Everything But The Cow, a blend of 7g non GMO soya protein and 20% real fruit, launched in Holland & Barrett and independent stores including Whole Foods Market in March.

The business is now in talks to roll out the range - which comprises Mango & Orange, Strawberry & Raspberry and Banana & Kiwi flavours (rsp: £2.49/300ml) - to supermarkets.

“Not a day goes by without people contacting us saying that they’ve tried the drinks, or have heard about them from a friend, or their local running club, or people at their gym and they want to know when they’re going to be able to buy them in their local shop,” said co-founder Lisa Clement. “We have recently started talking to supermarkets and are really excited about the response that we’re getting. They definitely understand that what we’ve created is something genuinely different.”

The Somerset-produced shake, which is endorsed by celebrity trainer Ramona Braganza, contains no refined sugar, is free from artificial flavours, sweeteners, additives and preservatives and is suitable for vegetarians.