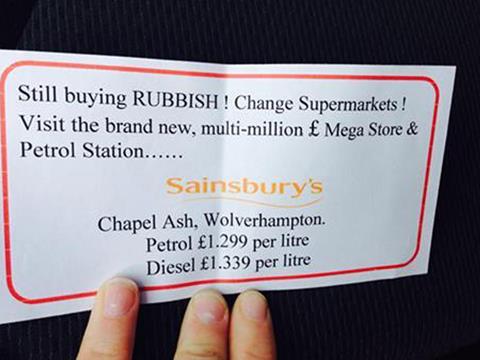 Since opening, shoppers at an Asda store less than a mile away have contacted Sainsbury’s to complain about leaflets left on their car windscreens.

The leaflet states: “Still buying RUBBISH! Change Supermarkets! Visit the brand new, multi-million £ Mega Store & Petrol Station…… Sainsbury’s”. It then gives the location of the store and fuel prices there.

One shopper who posted a photo of the leaflet on Sainsbury’s Facebook page said: “I am absolutely disgusted that Sainsbury’s has used such underhand tactics. I found this under my car window screen wiper as I left my local Asda store. It is a shame that your colleagues have had to go to such lengths.”

Another shopper added: “Does this imply that if we don’t shop at Sainsbury’s we eat rubbish… bit of a low flyer!”

A Sainsbury’s spokeswoman insisted: “This is not from Sainsbury’s and not something we would ever do.”

An Asda spokeswoman said: ”We’re pretty unimpressed that our customers were treated so rudely by Sainsburys and a bit confused as to why they would go to so much effort to promote to our value savvy shoppers the fact Sainsbury’s fuel is more expensive than Asda.”