Coconut oil continues to top our table, as dry weather in India - the world’s third largest coconut producer - has resulted in lower production, which has caused prices to rise.

Meanwhile, copper prices have moved up slightly over the past month, in response to Chinese plans to loosen regulations on its financial markets. This - combined with reports suggesting China’s copper stockpiles have reduced - has helped push up prices. On a year-on-year basis, however, copper remains significantly cheaper, currently down 15.2%.

Tea prices are down as a result of lower demand and the Indian rupee’s appreciation against the dollar, while reduced demand also continues to weigh down steel and cotton prices. 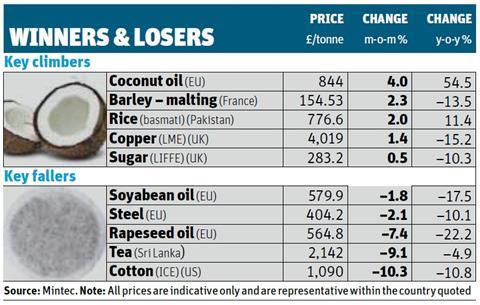