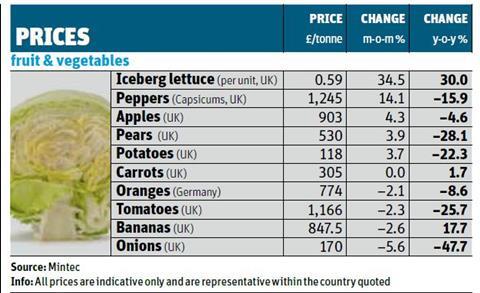 In keeping with typical January price movement, Iceberg lettuces are up more than a third month on month due to the closure of markets over the holiday period. Prices are also up 30% year on year, as a result of the UK lettuce season ending earlier than it did in 2013.

Pear prices are down more than a quarter on a year ago, as this year’s harvest in the UK created ample domestic supply. EU production for 2014 is down slightly, to 2.3 million tonnes.

Potato prices are down almost a quarter year on year due to ample supplies in Europe’s major producing countries. With demand limited, some produce has been moved into warehouses for long-term storage.

Increased availability of tomatoes, thanks to a 21% rise in global production, has caused prices to fall more than a quarter year on year. Supply for the winter season has switched to greenhouse produce and places such as Morocco and Canary Islands.