Steel prices continue to fall - month on month and year on year - due to weak demand from China, the world’s largest consumer, as growth in industrial production slows. World steel production rose in April, however, by 2% year-on-year to 137 million tonnes.

The price of PET has fallen even more steeply than steel over the past 12 months due to expanding global supply. While production capacity is forecast to grow by 20% to 29.4 million tonnes this year, consumption is estimated at below 20 million tonnes.

Demand for polypropylene, meanwhile, remains relatively good and prices have risen as a result of tightening supply. The price of polystyrene has fallen year-on-year following a decline in the cost of feedstock ethylene.

Testliner recycled board has dipped month on month due to reduced interest from buyers in Asia but demand has generally been good and prices are up year on year. 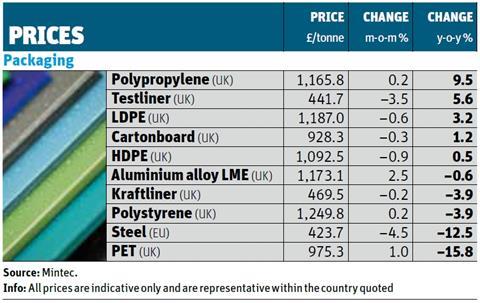