UK pork prices continue to fall as high supply is not being met by demand. To compound the issue, the strengthening pound against the euro has decreased the UK’s competitiveness with other EU pork markets.

While UK beef farmers are seeing similar prices to last year, across the Channel their French counterparts are suffering monthly and yearly price declines as a result of subdued demand, while the low price of milk is encouraging high cow culling. Brazilian beef is also down year on year as exports slow - with 74,000 tonnes being exported in January, down 29.6% year on year.

In New Zealand, lamb production is increasing seasonally as drought causes higher slaughter and a consequent drop in price.

While chicken is down in The Netherlands, new European laws being considered on enforcement of slaughter regulations could push up EU chicken prices in future. 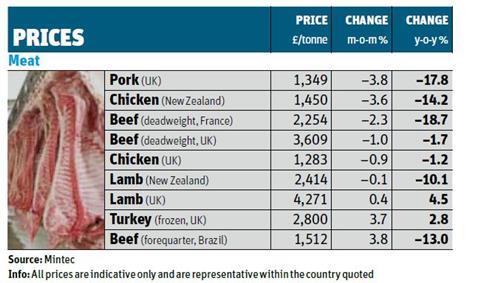