Wholesale prices: UK dairy prices fall across the board

In New Zealand, production is up 4% year on year for the first half of the season (June-November), while in the US, levels were up 3.2%. In total, UK liquid milk production for the 12 months to December 2014 was up 2% year on year.

UK butter prices are also plummeting, in response to falling demand towards the end of 2014, despite UK production being down 12% year on year in December and 3.5% for 2014 as a whole.

UK egg prices are falling month on month as a result of boosted supply levels, but prices remain up year on year due to the effects of tight supplies at the end of 2014 and increased consumer demand. 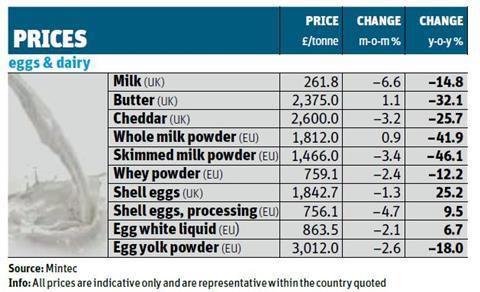