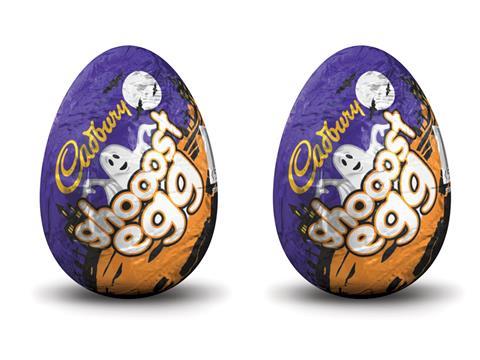 Mondelez has unveiled the Cadbury Ghooost Egg as the centrepiece of its Halloween treats for 2016.

The confectionery NPD (rsp: 62p/40g) is a chocolate egg filled with white fondant. Its pack will offer shoppers the chance to instantly win a family ticket to Alton Towers Scarefest by finding one of 50 eggs containing a yolk and coupon.

Also available for Halloween will be the Cadbury ‘treat-size’ lineup of bags featuring small versions of Heroes, Dairy Milk Buttons, Crunchie and Fudge designed to be handed to trick-or-treaters (rsps: £2.79-£6.49/170g-567g).

Mondelez expects incremental value sales of its treat-size confectionery to rise around 43% in the eight weeks leading up to 31 October.