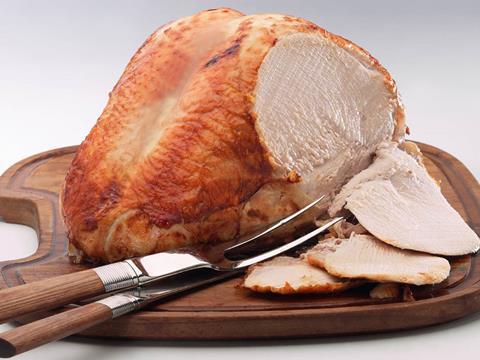 Growing appetite for turkey crowns and butterflies at Christmas is threatening to put British farmers out of business, producers have warned.

Kelly Turkeys said this week that increasing sales of “cheap imported” butterflies - a breast joint split down the middle - posed “a threat to the future of the traditional turkey sector” in the UK.

MD Paul Kelly said butchers in particular were being tempted to make “easy profits” by switching some orders from whole turkeys to breast joints, and urged retailers to keep selling whole British birds.

“Selling less and less whole birds is a recipe for disaster in the longer term. You lose your supply base once the critical mass has gone,” he said.

An industry source said this was also an issue for the mults, though producers found supermarket demand easier to manage because they gave more notice for orders than butchers.

He warned the turkey industry was facing lower returns and a food waste problem because legs that had previously been sold and eaten were now being “used as petfood or dumped”.

NFU poultry adviser Tom Lander confirmed that many consumers were now opting for butterflies and crowns - a whole turkey with the legs and wings removed - over whole birds.

He said this was putting pressure on producers, particularly when shoppers choose imported products.

“While industry has to adapt in line with these changes in buying habits, the public need to be aware that there are knock-on effects.”