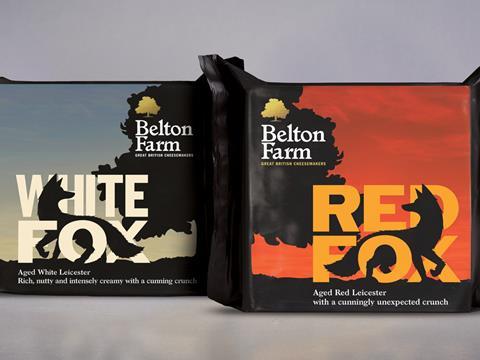 Cheesemaker Belton Farm is aiming to reinvigorate territorial cheese with the launch of a new ‘modern British’ brand into Waitrose.

Red Fox and White Fox would launch into 200 Waitrose stores later this month, followed by at least one of the big four in the autumn (rsp: £3/200g), Belton said.

The cheeses are based on aged Red and White Leicester recipes, and represented “a first branded play” for territorial cheeses in the mults in recent years, said a Belton spokesman, who added the brand wanted to “take a leaf our of craft beer’s book” by presenting the category to a younger audience.

Both variants will benefit from focused in-store promotional support, social media marketing campaigns and a programme of extensive consumer sampling, and would seek to engage with a “new generation of discerning cheese buyers”, said Belton MD Justin Beckett.

He added the supplier had recognised the need to promote, position and package cheese in a more relevant and stimulating way.

“The Fox family are Belton Farm’s distinctive take on ‘modern British’ cheese and we strongly believe that both Red and White Fox can champion the territorial segment by bringing excitement and widening the repertoire of our consumers,” added MD Justin Beckett.

The range will be officially launched at the Nantwich International Cheese Awards next week.