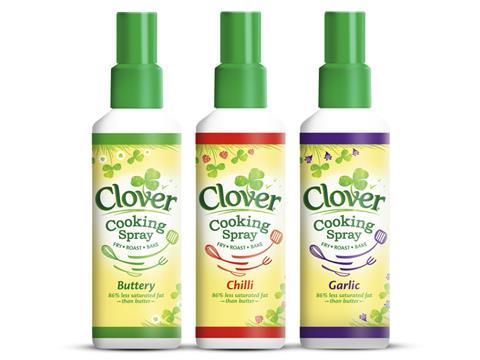 Dairy Crest has pulled its range of Clover Cooking Spray oils as it seeks to turn around the brand’s fortunes by focusing on core products.

The range - which went on sale in Tesco last April in chilli, garlic and buttery flavours before being listed by Asda, Morrisons and Ocado - was launched to widen the Clover portfolio as part of Dairy Crest’s Dairy for Life Plan to add value to the sector.

It was developed to provide a “quick, convenient and healthy way to add excitement and flavour” Dairy Crest said, but failed to mirror the success of stablemate Frylight, which has seen value sales grow 6.7% over the past year [IRI 52 w/e 27 February 2016].

The Clover Cooking Spray range was shelved in March, Dairy Crest said, but because of its six-month shelf life was still on sale in some retailers this week, including Sainsbury’s.

“We’ve taken it out as it was a peripheral part of the Clover range and we are now concentrating on the core Clover product,” said Dairy Crest marketing manager for spreads Neil Stewart.

The Clover brand has seen value sales fall by 13.8% over the past year, with volume sales down 8.3% [IRI 52 w/e 28 March] as shoppers continued turning away from dairy spreads and back to butter.

Stewart stressed the brand’s performance had picked up since a reformulation of the core spread range to contain no artificial ingredients last August, and it was now outperforming the category.