Danone adding some sparkle to its Volvic Touch of Fruit brand 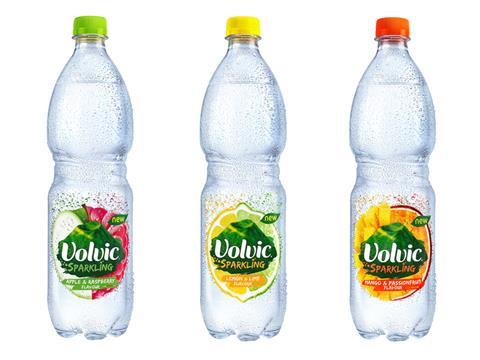 Volvic is expanding its Touch of Fruit flavoured water into the sparkling drinks market - and is targeting sales of £25m from the new range in two years.

Made from mineral water and sweetened with sugar and herbal extract stevia, the drinks are rolling out later this month in three flavours: lemon & lime, strawberry & raspberry, and mango & passionfruit. They will be sold in 920ml bottles (rsp: 99p).

Sales of Touch of Fruit had grown 15.9% year on year to £94m [IRI 52 w/e 8 November, 2014], said brand owner Danone, which claimed the sparkling launch would mark a “step-change” in the flavoured sparkling water category.

“Until now, this category has lacked a strong brand presence and has been dominated by artificially sweetened drinks with a poor taste perception,” claimed Volvic brand head Al Strang. “This is one of the biggest innovations in the brand’s history, and we believe it will be worth £25m within two years,” he said. Strang added the launch would be supported with a “360-degree marketing strategy” planned for later this year.

The rollout of the sparkling drinks follows a packaging redesign across the entire Volvic range last summer, as well as a dramatic new ad campaign for Volvic Natural Mineral Water that featured dinosaurs and armies. The overall Volvic brand has also benefited from consumer interest in bottled water, which contributed to the category growing 8.9% by volume on 11.2% value growth [Nielsen 52 w/e 11 October 2014].