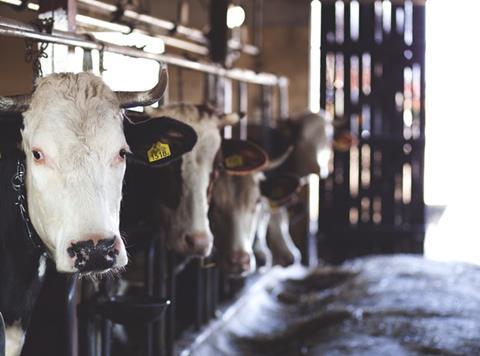 The food industry says that it fears a “complete and catastrophic embargo” on exports in the event of a no-deal Brexit after the government admitted that it had yet to apply for regulatory clearance required for selling animal products to the European Union. (The Times £)

Michael Gove, the minister in charge of no-deal Brexit planning, has been drawn into a furious row with the food industry after claiming that “there will be no shortages of fresh food” in the event of a disorderly departure from the EU on October 31 (The Financial Times £). The British Retail Consortium (BRC) has been speaking out to say the availability of fresh foods will be impacted as a result of checks and delays at the UK border (The BBC).

Marks & Spencer will almost certainly drop out of the FTSE 100 this week, ending the retailer’s non-stop presence since the index of leading shares was launched 35 years ago. In a sign of the times, the 135-year-old mainstay of the British high street is likely to be replaced by Polymetal International, a Russia-based miner (The Guardian). Three of Britain’s best-known blue-chip companies are on the verge of dropping out of the FTSE 100 in a ‘hugely symbolic’ changing of the guard as investors ditch shares once viewed as safe bets (The Daily Mail).

Archie Norman’s bid to stop M&S going out of fashion – the Marks & Spencer chairman may be eyeing a radical split of its clothing and food divisions (The Times £). Can turnaround king really save Marks & Spencer? Archie Norman has his work cut out as chain faces Footsie exit (The Daily Mail).

Premier Foods has ended a nine-month search for a new chief executive, appointing an insider to lead the business amid a strategic review and pressure from activist investors (The Financial Times £). The maker of Mr Kipling cakes and Bisto gravy has shaken up its boardroom amid intense activist pressure (The Times £). The troubled owner of Mr Kipling cakes took the unusual step of appointing a new chief executive and chairman at the same time as it seeks to plug a leadership vacuum (The Telegraph).

Philip Morris’s merger with Altria could spark flurry of hook-ups, writes The Sunday Times. British American Tobacco and Imperial Brands, the world’s third and fourth largest tobacco players, are now under pressure to make their own moves to avoid being dwarfed by the enlarged group. Shares in both companies, once regarded as dividend-paying safe havens, have fallen by a quarter over the past year. (The Times £)

The FT has a long read on the resilience of Big Tobacco in the wake of the $200bn merger talks between Altria and Philip Morris. The lasting value of the two Marlboro makers has surprised and dismayed public health advocates, it writes. (The Financial Times £)

‘Tobacco companies are in a crisis’: can the Philip Morris and Altria mega-merger stitch Marlboro Man back together? (The Telegraph)

The rationale for the Altria/Philip Morris merger is to bolster technological firepower for their e-cigarette brands — the fast growing alternative to cigarettes — and follows British American Tobacco’s $49.4bn merger with Reynolds in 2017 for similar reasons (The Financial Times £).

Juul Labs has raised almost $800m in the face of escalating regulatory scrutiny of the US ecigarette market it leads, in a sign of investors’ confidence in a vaping technology that lies at the heart of a potential $200bn merger between Philip Morris International and Altria. (The Financial Times £)

It was a case of Beanz Meanz Profits at the British arm of US food giant Kraft Heinz, as the food producer saw sales jump 5% last year. (The Daily Mail)

An agricultural technology company is close to shipping its first products and opening an additional international office. Intelligent Growth Solutions has designed vertical farming systems, lower energy lighting for indoor growing and a range of software to monitor how plants grow. (The Times £)

Nearly a third of Britons believe insects will eventually be part of mainstream human diets in the UK amid mounting challenges in food production, new research reveals. (The Guardian)

Amazon has hired the legal chief behind Asda’a failed £7.3bn merger with Sainsbury’s in a move that strengthens its ties to the UK grocery market. (The Telegraph)

Greene King is braced for a backlash over an £850,000 payoff to its former boss. The FTSE 250 pubs group, which agreed last month to a £2.7bn takeover by Hong Kong’s Li Ka-shing, gave the sum to Rooney Anand to stop him taking roles with rivals or poaching staff. (The Times £)