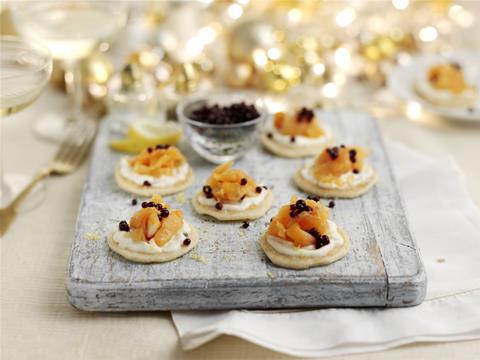 Festive caviar sales hit their highest ever level as Brits splashed out on more specialist seafood this Christmas. Caviar sales reached £167,502 in the four weeks from 6 December to 2 January 2016, a 44% uplift on the previous year, according to new market data published by Seafish.

Sales of “traditionally underused” seafood species also saw significant growth, with whitebait sales rocketing by 11,858% year on year to £34,500 and cuttlefish sales up 234% to over £3,000. Snapper established itself as an exotic favourite, with sales up 418% year on year to £10,200, while bottom feeders such as skate and ray also proved more popular, with sales up 161.2% to £122,470.Sales of ling, a fish native to the Arctic and North Sea which has a similar taste and texture to cod, were up 3,128%.

“As well as being an indicator of shifting consumer tastes, these findings also reflect an increased effort from retailers to expand their product ranges and bring undervalued, high quality species into the mainstream.”