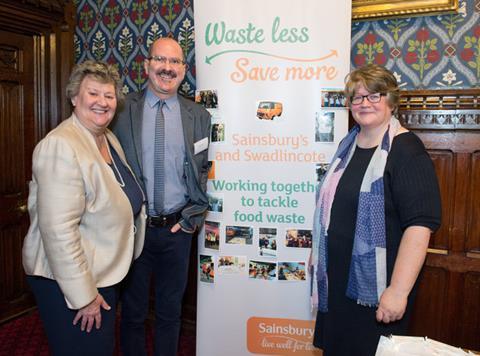 Sainsbury’s has taken its fight against food waste to more than 30 MPs at a Westminster event this week.

The supermarket showcased its work at Swadlincote - the test site of its £10m Waste Less, Save More initative - to senior figures including Defra head Thérèse Coffey on Tuesday.

Highlighted projects included its partnership with food sharing app Olio, which resulted in over 10,000 items of food being shared over six months, and waste calculator Winnow, which has yielded an average food waste reduction of 68% in a small-scale trial.

Sainsbury’s also shared findings from its ‘Fab Foods’ school engagement programme, which has cut food waste by up to 37%.

The Westminster event came shortly after Sainsbury’s announced the extention of its Waste Less, Save More project to 110 communities beyond Swadlincote.

Paul Crewe, head of sustainability at Sainsbury’s, said the response from MPs was “fantastic”. “We’re looking forward to rolling out the programme to more towns and cities with their support.”

Swadlincote MP Heather Wheeler added: “The fact that Swadlincote and Sainsbury’s have worked together to trial initiatives means we’ve taken out the first barrier for MPs by offering tried and tested solutions. I hope their learnings will help make an impact on the fight against food waste, as we spread the successes from Swadlincote nationwide.”