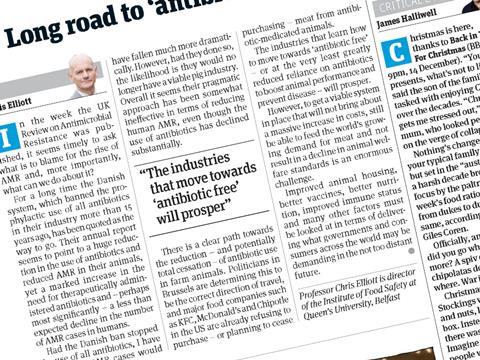 Sir, Chris Elliott is right to note that it is a ‘long road to antibiotic free’ (19 December, p39) but many organic farmers in the UK are already operating successful systems without routine antibiotic treatments. However, getting to this position for all livestock production from where we are now will be costly.

As ever in farming, the answer is complicated - for those Nordic countries where a ban on prophylactic use of antibiotics for livestock has been the norm for over a decade, while anti-microbial resistance has reduced in livestock, the same is not true in humans, and an unforeseen consequence has been an increase in the requirement for therapeutic use of antibiotics.

While a number of multinationals are considering or are already refusing purchase of meat from antibiotic-medicated animals, we need to ensure animal welfare remains a top priority - should we refuse treatment for a sick animal just to fit the requirements of a certain label?

In organic farming systems, animal welfare is a very high priority. Animals are assisted to be healthier and better-equipped to deal with illness. In addition, networks like Innovative Farmers are leading on-farm field labs that can help farmers reduce their reliance on antibiotics.

Just before Christmas the ‘final line in our defence’ was crossed as the gene MCR-1, resistant to our ‘last line’ antibiotic colistin, was found in pigs and humans in England and Wales. This should be a wake-up call to the world.