GM's long and awkward history must be left behind in UK 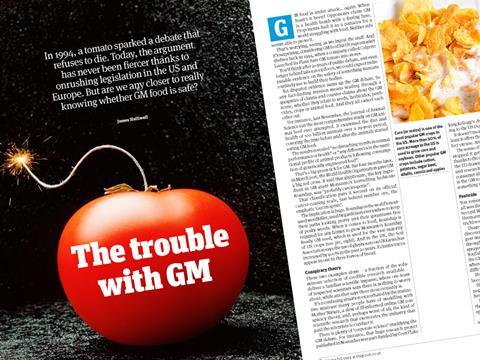 Sir, ‘The trouble with GM’ (10 October, p28) gives a fascinating overview of the long and awkward history of GM crops. It highlights how great hope has been injected into a narrow and ultimately failing technology. For over 20 years, supporters of GM crops have been promising higher food yields without a single commercial example of a GM crop engineered to yield more appearing on the market.

The declining band of GM supporters are especially vociferous in England, because, along with the US, we are one of the few major food markets in the world where successive governments have been pro-GM. But consumers are not - there is no market for GM food in the UK, and export markets want, in the words of the Scottish government, ‘clean, green’ food, which is why Scotland, Wales and Northern Ireland, along with countries covering over two-thirds of Europe’s farmland, are going non-GM. And the market for non-GM food is growing rapidly in the US, where the ‘non-GMO’ label is the fastest-growing grocery label.

Unfortunately this focus on GM in England means newer technologies providing great results, such as Marker Assisted Selection (MAS), are being overlooked. The UK government should focus on innovative agricultural research including agro-ecological systems such as organic farming, which provide good yields of crops with far lower inputs and produce food with higher animal welfare, lower pollution, and with more wildlife and jobs on farms.