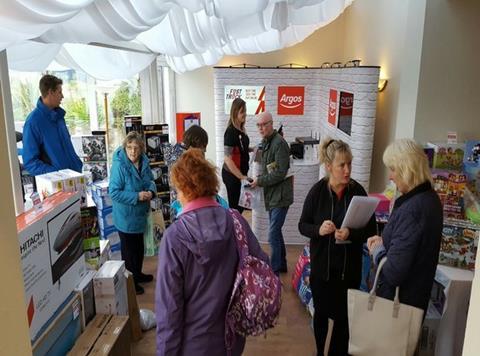 Argos is planning to stage more pop-up shops following a positive response from consumers, The Grocer has learnt.

The retailer set up eight temporary shops in festivals and remote locations such as the Isles of Scilly that proved “very popular” with customers, said Chris Featherby, retail operations manager at Sainsbury’s Argos.

Featherby revealed Argos would now look to open more pop-ups, which take orders and payment electronically and can be set up in just 45 minutes.

The orders are able to arrive at customers’ doors within four hours as part of its Fast Track delivery option, which costs £3.95.

“Customers really love it and for me the Isles of Scilly was a real eyeopener, some of the kids hadn’t been to the mainland before and had never seen an Argos,” said Featherby.

“It’s this idea of - how do you get the brand out there to our customers? A lot of them aren’t Argos shoppers,” Rogers said. “Consideration could be higher so getting our physical presence out there to our store estate will ultimately help drive our presence online as well.”