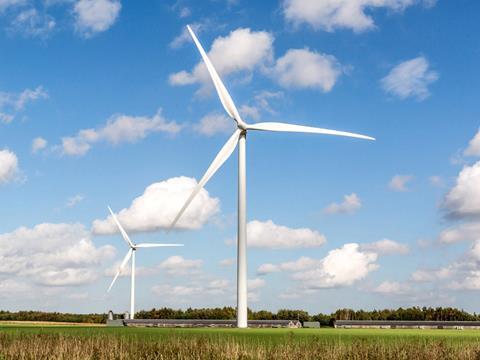 A renewable energy initiative launched three years ago by Bernard Matthews is on track to make the company entirely energy self-sufficient by next year, and carbon neutral by 2020.

The initiative, dubbed The Big Green Plan, has seen the turkey giant attract more than £100m in third party investment for a range renewable energy projects on its estate of farms and processing plants, consisting of wind and solar power, more than 200 biomass boilers and a £4.2m anaerobic digestion plant, which uses 29,000 tonnes of waste a year from its factories.

“Processing waste through the anaerobic digester removes about 1,200 lorry journeys of waste a year, a reduction of more than 60%,” said group procurement director Richard Southgate, while the company’s recently opened 60-acre solar farm in Holton, Norfolk can generate enough energy to power 3,000 homes.

Four wind turbines are now installed at Bernard Matthews sites across East Anglia, with plans to install another five. Each turbine generated enough electricity to power almost 700 homes apiece, added Southgate, with the whole project having the potential to add more than £1m to Bernard Matthews’ bottom line a year once complete.

“Most of the energy we create is sold back to the National Grid,” he said. “Sustainability is central to our long-term business strategy, and our aim is to become the UK’s greenest farmer, which can only be a good thing for retailers who will have their own sustainable aims.”