Bulldog’s elves encourage men to give each other gifts 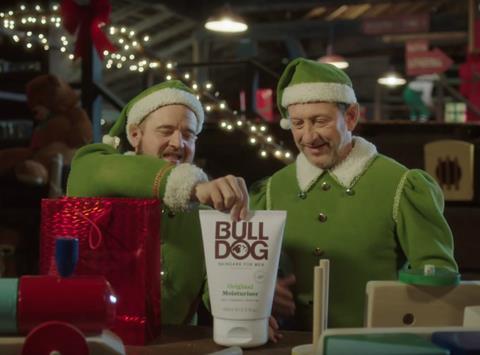 Bulldog Skincare for Men is putting the bromance into Christmas with its first major ad campaign.

The new push, Awkward Elves, is aimed at encouraging men to buy gifts for one another – because 60% of fellas don’t give their best mate a festive pressie, says the brand.

The new commercial, which is being supported by outdoor activity, takes a stand against “unrealistic ideals of masculinity” and celebrates “the reality of male behaviour” as a male elf hands his bestie a human-sized gift from Bulldog.

The grooming brand recently launched its Christmas range that was “purpose built for man to man gifting”, said Bulldog founder Simon Duffy. “We’re confident that a gift from Bulldog will avoid any trace of awkwardness,” he added.

Last month, the brand – which is up 12.1% in value sales on volumes up 3.9% [Nielsen 52 w/e 13 August 2016] – announced its acquisition by Edgewell Personal Care, the US-listed owner of Wilkinson Sword and Playtex.