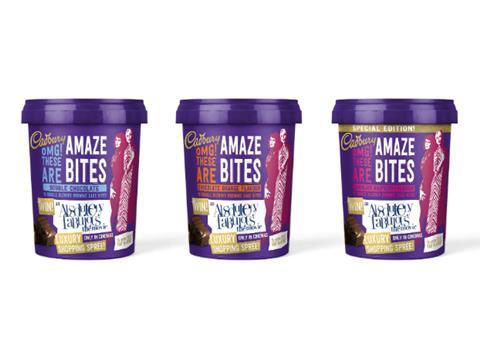 Premier Foods has teamed up with the Absolutely Fabulous movie through its Cadbury Cakes Amaze Bites range.

The partnership will see an on-pack promotion offering the chance to win an ‘absolutely fabulous’ shopping spree, and a new special-edition Chocolate Raspberry flavour.

To enter the draw, consumers have to text their pack code by 19 September. Prizes include the all-expenses-paid shopping weekend in London, while 20 runners-up will get two cinema tickets.

The brand hopes the variant – available from June to August – will “generate new interest” in Amaze Bites resealable tubs (rsp: £1.99).

The tie-up will be supported by a four week national radio campaign from 20 June, featuring the film’s main characters, Edina and Patsy.

“Since its launch in October 2015, the Cadbury Amaze Bites range has been a massive hit with consumers and is already worth £4m [IRI 52 w/e 21 May 2016],” said Karmel Maletta, innovation controller at Cadbury.

“The film is a great fit for Amaze Bites as both appeal to a similar audience who like to have fun and live life to the max.”

The Absolutely Fabulous movie is in cinemas from 1 July.