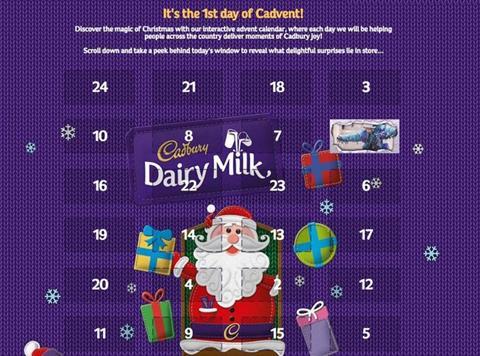 Cadbury has launched a campaign across Yahoo and Tumblr to drive digital engagement for its #Cadvent Christmas push.

Unveiled today (1 December) in partnership with content studio Yahoo Storytellers, the campaign is a repeat of last year’s activity and will lead with TV and digital. It will also include ads on Global Radio stations, promoting daily Christmas themes and driving listeners through to the Cadvent.co.uk page on Tumblr.

The campaign is Cadbury’s debut on Tumblr, in response to the popularity of the season on the site last year, where nearly 25 million Christmas-themed posts were made.

A digital advent calendar will appear on the Tumblr page, featuring opening windows which reveal a video for each day in the run-up to Christmas. The themed videos will be supported by 24 corresponding Gifs and articles, which will cover a “yuletide topic or trend” such as decorations or recipes.

“The build-up to Christmas is one of our favourite times of year, and we loved watching the #Cadvent campaign unfold last year,” said Edward Desbois, head of strategic solutions at Yahoo Storytellers. “We’re incredibly excited that Yahoo Storytellers will be helping to bring the festive fun to a much wider audience in 2016.