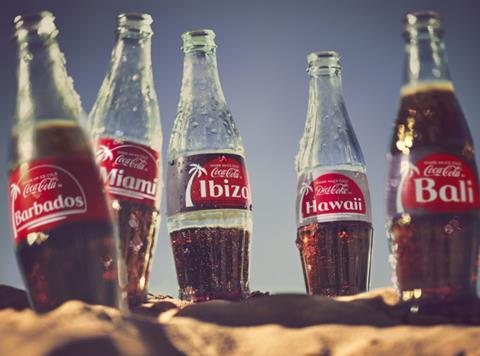 Coca-Cola European Partners is bringing back its Share a Coke campaign – but with “a summer twist” that sees the logo on bottles of Coca-Cola, Coca-Cola Zero Sugar and Diet Coke joined by the names of international holiday destinations.

Kicking off next month, the push, which first appeared in 2014 featuring popular first names, is to be backed by a £10m spend across a variety of activities. An on-pack competition will offer a ‘dream’ holiday every day from 10 May to 9 July, with locations including Hawaii, Bali, Ibiza and Miami – and CCEP is to undertake its biggest-ever UK sampling activation, giving away 11 million 150ml samples of Coca-Cola Zero Sugar in cities and festivals throughout the country.

The new ad Pool Boy is set to enter heavy TV rotation on 19 May, showing a family racing to serve a glass bottle of Coke to a handsome young worker. It is already one of Coca-Cola’s most popular clips to date, achieving more than 3.5 million views on YouTube in just three weeks, according to the soft drinks giant.

The original Share a Coke was “a global phenomenon”, said Simon Harrison, operational marketing director at CCEP GB. “This year, we are building on its success by reminding people why Coke makes summer more special.”