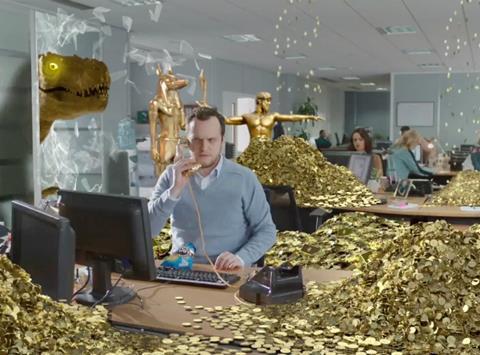 The £1.4m promotion will be backed by a TV spot featuring a t-rex that shoots lasers from its eyes

KP Snacks is offering five shoppers the chance to win £10,000 by finding one of a quintet of golden crisps in packs of McCoy’s.

The £1.4m campaign will be supported by activity including another iteration of the brand’s When Flavour Calls TV ad. The latest spot sees an office worker named Thomas being showered in golden treasure, with help from a tyrannosaurus rex that shoots lasers from its eyes.

To support the wholesale channel, McCoy’s has created a ‘standout’ depot display to “create some theatre”.

The prizes on offer reflected McCoy’s “soaring success” over the past 12 months, said Andy Riddle, branded sales director at KP Snacks. “This exciting new on-pack promotion provides us with the opportunity to engage with both our retail customers and consumers.”