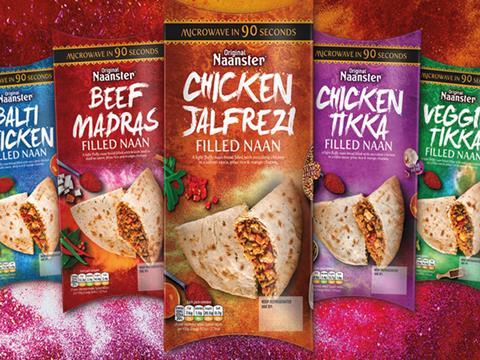 Filled naan bread brand Naansters is being relaunched with a new look and range expansion.

Officially rolling out at the Lunch! food to go show this month, the new pack design and colourful branding has been developed by agency Bluestone360 and now features a tear strip to make the product easier to eat from the pack.

The line-up is being extended with new flavour chicken Jalfrezi, which will sit alongside the existing Balti Chicken, Beef Madras, Chicken Tikka and Veggie Tikka (all rsp: £2). Naansters listings include Tesco, Morrisons, Spar and Nisa as well as distribution through Brakes.

The relaunch comes five months after brand owner Food Attraction announced it was opening a second factory close to its current site in Leicester that would increase production from 120,000 units a week to 500,000. Two years ago, Naansters producer Global Fine Foods went into administration and was acquired by its original founders, the Karia family. They set up Food Attraction in July 2013.

“The brand has come so far in such a short space of time – looking at it in its new packaging, it looks like a butterfly coming out of its chrysalis,” said Food Attraction MD Jake Karia.