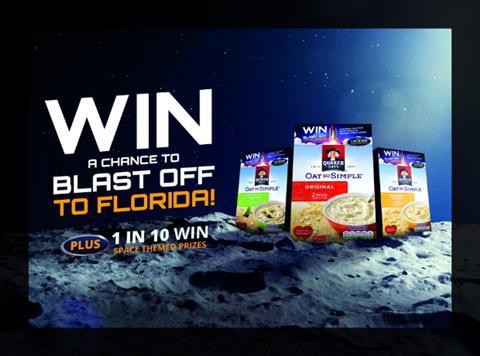 Coming on the back of the PepsiCo brand’s current TV ad starring Buzz Aldrin, the latest push is set to roll out in the coming weeks, with a top prize of an eight-day holiday in Orlando, Florida, for four, featuring a behind-the-scenes tour of Space Shuttle Atlantis.

Other giveaways include five holidays for four to Orlando (with a visit to the Kennedy Space Center), indoor skydiving and stargazing experiences, and moon print tote bags.

Promotional packs of Quaker Oats So Simple sachets, Family Pack and Big Bowl lines will contain a code that gives shoppers a one in 10 chance to win instantly when entered online.

The campaign was to tie in with the Aldrin ad so that the combination of the two would “really help reinforce the benefits of eating oats”, said Eric Williams, Quaker’s senior brand manager. “It’s fantastic to be able to offer shoppers the chance to win a holiday, and we expect the promotion to help drive rate of sale for retailers at this key time of year.”

In time for the drive, the breakfast brand is to add another flavour to its Family Pack and Big Bowl formats: Apple & Blueberry.