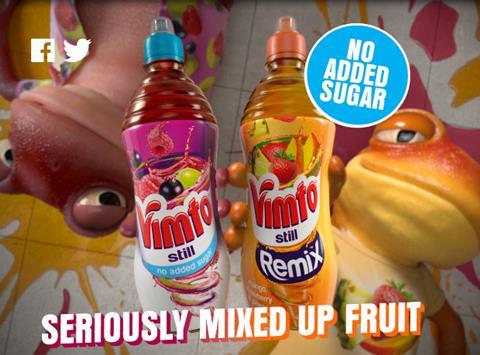 Vimto is kicking off a multi-channel summer campaign to drive awareness among teenagers of its No Added Sugar Original and new Remix variants.

Launching on 4 June and running until 19 August, the nationwide push sees the return of the brand’s Vimtoad mascot, promoting the low-sugar drink. It is joined by Mixtoad representing Remix, the three-fruit beverage launched earlier this year.

The two characters engage in a #toadoff, frantically hurling fruit at one another in an animated clip produced by creative agency Driven and Aardman, the Oscar-winning studio behind Wallace & Gromit. The ad’s music was written by Aniff Akinola, who co-wrote A Guy Called Gerald’s 1988 hit Voodoo Ray.

The campaign - with the strapline ‘Seriously Mixed Up Fruit’ - will target teens via cinema, VoD, social media advertising, and a branded lens on Snapchat. Shoppers have the chance each week to win an iPad Air 2 by entering their drink’s barcode number into Vimto.co.uk.

“Our strategy is designed to engage and entertain teens to maximise awareness of both Original Vimto and Vimto Remix,” said senior brand manager Vicky Marsden. “Both variants continue to outperform the soft drinks category. As the campaign kicks off, we expect the demand to grow even more.”