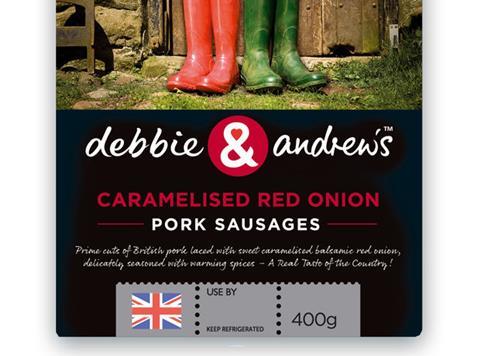 Sausage company Debbie & Andrew’s is pushing further into the burgeoning free-from market with the launch of a wheat, gluten and dairy-free Caramelised Red Onion Pork Sausage.

Debbie & Andrew’s hopes the product, rolling into Asda this month (rsp: £2.98/400g pack), will build on the popularity of its Harrogate 97% pork sausage.

“Fans with food sensitivities have been telling us they want more Debbie & Andrew’s-style sausages they can eat,” said MD Ian Bagnall.

“One of the top flavour favourites is Caramelised Red Onion Pork, so we’ve launched a Debbie & Andrew’s version to meet the demand.”

Debbie & Andrew’s hopes to eventually make its entire range wheat, gluten and dairy free, and the company is working with Coeliac UK to raise awareness of ­gluten allergies.

Over the past 12 months, Debbie & Andrew’s has extended its ranges in Asda, Sainsbury’s and Tesco and launched into Morrisons. The sausage company, which is now owned by ABP subsidiary WA Turner, achieved 38.9% growth last year compared with a 5.6% decline in the overall sausage market.