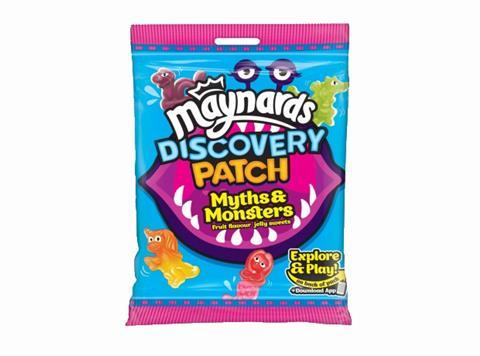 Mondelez is launching a new brand of jelly and foam sweets under its Maynards banner.

Featuring shapes including unicorns, penguins and skulls, the sweets were softer than other Maynards products, according to Mondelez senior brand manager for candy Zoe Cashin-Howe. “They look fantastic. We are trying to lead the way in the definition of our confectionery moulds,” she said, adding that the Discovery Patch moulds were also used for sweets launched in Ireland last year under The Natural Confectionery Co brand.

A key theme of the new range was ‘discovery’, and packaging features facts and quizzes. Consumers can access augmented reality content by scanning packaging using a Maynards app. The company has also developed its first single-facing shelf-ready packaging to encourage retailers to stock a range of different Discovery Patch lines, even in smaller stores.

The launch is being backed by a £3m campaign that will include TV. Mondelez said the budget was larger than its spend on Sour Patch Kids, which rolled out in 2012 and has played a major role in driving growth of the overall Maynards brand. Value sales of Maynards have grown 10.7% year on year to £64m in a market up 4.1% [Nielsen 52w/e 18 October 2014].