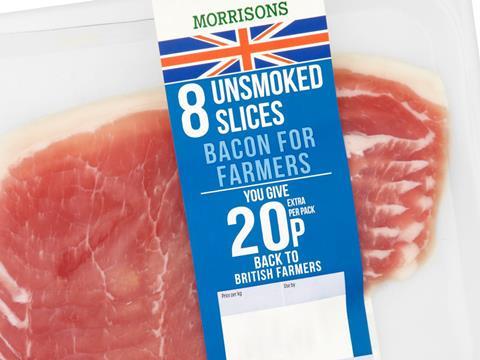 Morrisons has launched the latest extension to its ‘for Farmers’ brand with a move into the bacon category.

The retailer is selling the Bacon for Farmers brand - revealed by The Grocer in May - in 250g packs of eight smoked or unsmoked British bacon rashers for £2 each.

The launch follows the runaway success of Morrisons Milk for Farmers - which has returned about £300,000 per month to farmers in extra payments since launching last October - and the launch of cream and cheese brand extensions.

“After listening to customers, it became clear that some of them wanted the chance to support other areas of British farming,” Morrisons said.

National Pig Association CEO Zoe Davies said: ” We are clearly very supportive of the new brand, but we would like to find out more about how the payment mechanism works.”