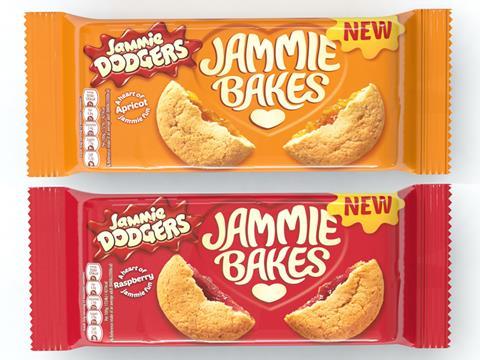 Burton’s Biscuit Company is looking to attract a new, older audience to its kids’ Jammie Dodgers brand with the launch of Jammie Bakes.

Rolling out next month, Jammie Bakes are described as “crispy, golden biscuits with a soft, jammie centre” and will be available in two flavours: raspberry and apricot. They will carry a £1.49 rsp, with a £1.39 price-marked version available to cash & carries.

Burton’s described the launch as “the most significant innovation” for Jammie Dodgers since its introduction more than half a century ago. Sales of the brand are currently £21m [Nielsen 52 w/e 4 January 2015].

“We know that when adults eat Jammie Dodgers it often evokes memories of their childhood, but they also told us that even established favourites they really enjoy can be made more relevant,” said Burton’s customer category management head David Costello. “Jammie Bakes gives Jammie Dodgers more adult appeal and reinforces its position as one of the UK’s best-loved family brands.”

Burton’s has been looking to boost the presence of the Jammie Dodgers brand, last year appointing licensing agency Start Licensing to represent the brand and take it into new categories. This resulted in Finsbury Foods rolling out a Jammie Dodgers celebration cake to Tesco and Asda last month.

The Jammie Bakes launch will be backed with a £3m programme including two new TV ads featuring the strapline ‘You Know You Want To’. Support will also include online and in-store activity.