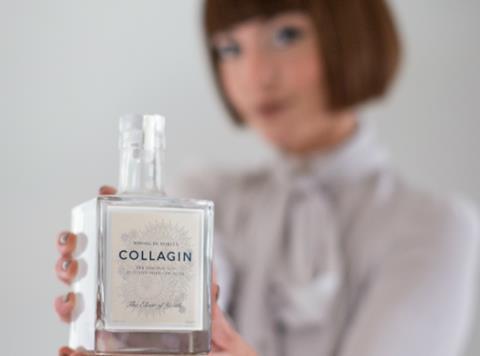 A gin distilled with collagen has gone on sale in the UK aimed at beauty conscious drinkers.

Created by drinks startup Young in Spirit, the 40% abv CollaGin launched exclusively on DrinkSupermarket.com this week.

The spirit, a blend of juniper, cardamom, star anise, pink grapefruit, fresh orange and angelica root, also contains marine-based collagen powder, which is odourless and tasteless and does not break down when added to alcohol, its maker says.

The drink (rsp: £34.99/50cl) was aimed at those looking for an unusual gift for a friend or family member, said co-founder Camilla Brown, who established the business in May 2016 with Liz Beswick. She described the gin’s flavour as “fragrant and soft with a velvety aftertaste and hit of vanilla”.

Brown confirmed the plan was to launch the SKU in the UK before expanding internationally by December and hoped to develop a further four products over the next five years.

“We have lots of interest in Australia and Asia already,” she told The Grocer. “We’ll be launching other spirits after CollaGin, and the dream is to open our own boozy spa with a distillery in the back.”