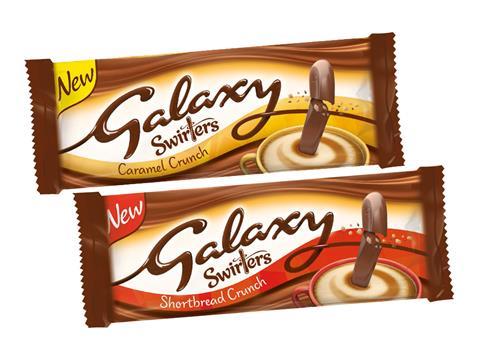 Mars Chocolate is eyeing billions of hot drink occasions with the introduction of Galaxy Swirlers.

Unveiled today (21 April) to coincide with National Tea Day, the biscuit-filled chocolate bar can be broken into 10 fingers intended to be dunked in a hot beverage. Two variants of the new sharing tablet – Caramel Crunch and Shortbread Crunch – will land on shelf next month (rsp: £2.09/175g).

The lineup had launched to tap the UK’s 22 billion hot drink occasions in-home every year, said Mars, with Galaxy value sales flat at £236.3m, with volumes down 4% [Nielsen 52 w/e 31 December 2016]. The NPD was set to be backed by “impactful PoS solutions that communicate the sharing moment in-store”.

Swirlers is the latest large block innovation from Galaxy, which last year added Crispy and Toffee & Popcorn variants to its Duet range.

Galaxy, the UK’s second-biggest chocolate brand, will run TV advertising over 42 weeks this year, as part of a £13m investment.