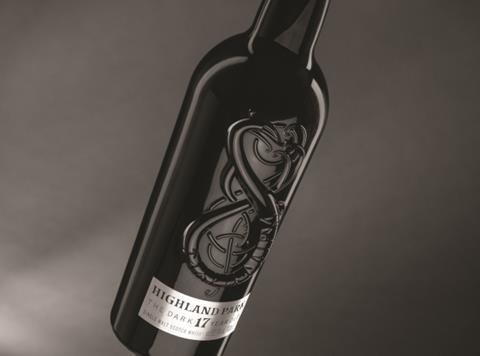 The 17-year-old whisky is matured in European oak sherry casks, and was “inspired by the autumn and winter seasons on Orkney”, said the brand. It had a “deep flavour packed with dried fruits, nuts and spices overlaid with hints of smoky peat”, it added.

It has an abv of 52.9% abv, and has rolled out into The Whisky Exchange and The Whisky Shop priced at £190/70cl. It comes in a black bottle embossed with a “serpent dragon”.

Its release will be followed by the launch of a second limited edition whisky, The Light, in spring 2018.

Both editions “share the story of the contrasting seasons of our Orkney Islands and the resulting intense balance of Highland Park whisky”, said Highland Park brand director Jason R Craig.

It comes as sales of Highland Park’s whiskies are booming. The brand’s 12-year-old Scotch added £2m to its value this year, expanding almost a third (32.3%) to £8.2m.