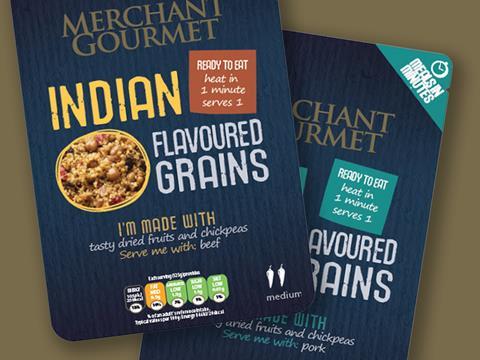 Merchant Gourmet is expanding its line-up with a range of single-serve pulses and grains.

Rolling into Tesco from 17 August under the Meals in Minutes range, the 125g pouches are Thai and Indian (rsp: £1.39). Together with a third flavour, they roll out more widely later this year.

The Thai flavour contains wheatberries and black rice with coconut milk, spices and kaffir lime leaves; while the Indian flavour is a mix of basmati rice, pearl barley, green lentil and chickpeas with chilli, ginger and cumin.

Merchant Gourmet said the packs would cater to the 60% of UK consumers who prepare meals for themselves at least once a day, according to the Food Standards Agency. “With the new 125g pouches, we wanted to explore using a wider variety of authentic flavours, while giving time-poor, food-conscious consumers the ultimate solution,” said retail sales and marketing director Sanjay Davda. “We are excited for a wider consumer base to try our delicious new Indian and Thai inspired flavours.”