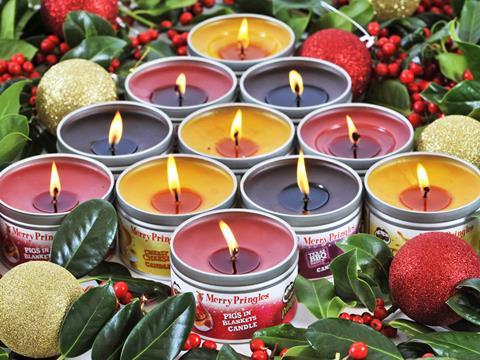 Pringles has developed a range of scented candles featuring the smells of its savoury crisps.

The three-strong line comes in Pigs in Blankets, Cheesy Cheese and Texas BBQ variants - each boasting the same savoury scent as the Pringles flavour it is based on.

A batch of 500 candles, which has been delivered to ‘lucky testers’, has been produced for this year, with plans for a “much larger run” to be rolled into stores for Christmas 2016, pending the initial reception, said Kellogg’s.

“Sales of Pringles soar by almost 150% at Christmas time when everyone’s enjoying parties and catch-ups with their friends and family,” she said, revealing that the candles were “particularly pungent”.

“There might be a need to scale back on the odour before unleashing them on a mass scale next year.”