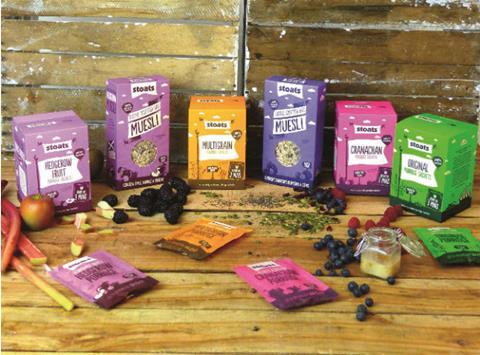 Available now, the 40g porridge sachets come in four flavours: Original and Multigrain in boxes of six (rsp: £2.39), and Cranachan and Hedgerow in packs of five (rsp: £2.99).

The NPDs - to be showcased at Caffè Culture on 10-11 May - follow a survey of Stoats customers that found 42.4% wanted muesli from the brand and 38.5% craved porridge available in sachets, said managing director Tony Stone.

“We’ve been listening to what our customers want, which has led to the development and launch of our new sachets and muesli. We’re excited to get the products in front of consumers,” he added.

Both ranges are sold by Eatstoats.com, Amazon and UK wholesalers, including Hider Food. Further rollout is planned throughout 2016, with a supermarket listing scheduled for September 2016, said the brand.