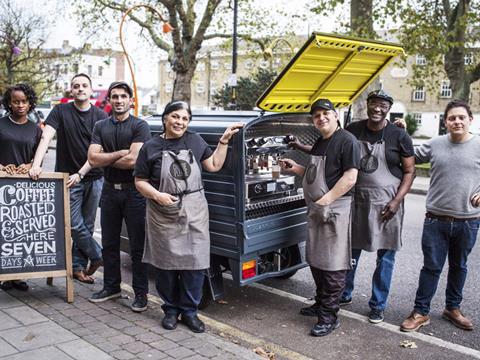 The Change Please initiative, launched today (23 November), will house homeless individuals in temporary accommodation and train them as baristas, who will be paid the London living wage for selling drinks from coffee vans.

The aim was to equip participants with the skills and experience to enter the mainstream workforce, said Old Spike Roastery, which is a social enterprise founded to provide jobs and housing for homeless people. Profits would be reinvested into the programme to train a new cycle of baristas, it added.

The coffee vans will initially be rotated between high-footfall areas of London, such as Covent Garden and Borough, with plans to launch across major UK cities over the next year. Their location will be announced daily on the partnership’s website and social media.

The Big Issue’s national distribution director Peter Bird said: “Selling our magazine works well to provide people currently living on the streets with a way to help themselves work towards a better life, but there is a gap between that segment of homelessness and securing a regular job.”

The initiative is the brainchild of ad agency FCB Inferno, which developed and sponsored the venture, contacting The Big Issue founder John Bird 18 months ago with the idea of borrowing the magazine model for coffee.