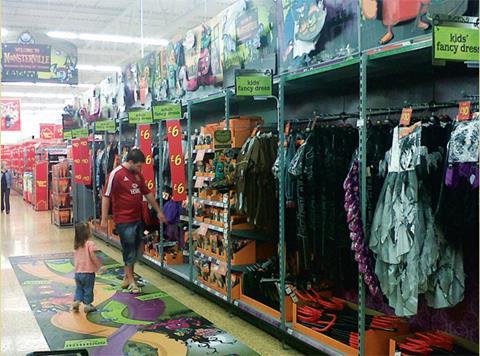 There’s blood in the shopping aisles - and we’re not talking about brutal range rationalisation.

With Halloween just a week away, suppliers and retailers seem keener than ever to sink their teeth into a seasonal opportunity, filling stores with grim and gruesome goodies.

“Themed posters and PoS are more in evidence than previous years,” says Assosia MD Kay Staniland, adding the range of non-grocery lines including fancy dress, toys and decorations has once again grown.

When it comes to featured space, foyers and back aisles have become more important than previous Halloweens given pressure to remove confectionery from till areas.

In the four weeks ending 11 October, 17.5% of featured space promotions were located in the till aisle, down one percentage point on the same period last year. All the major confectionery brands ran fewer deals in the till aisle. Cadbury instead favoured the back aisle, which accounted for 37.6% of its offers, up eight points on last year, while Mars and Nestlé both made greater use of foyers.

Confectioners have also altered how they are promoting. Cadbury and Nestlé are running fewer deals than last Halloween but all are offering deeper promotions, for example. Multibuys deals have become more prevalent this year, partly as a result of grocers hoping to tempt consumers to mix and match Halloween treats. Seven of the 10 most promoted brands are using more x-for-y deals than last year. Of those 10 brands, Coca-Cola has made the biggest shift towards multibuys - 80% of its featured space promos versus 63.4% last year.

Bucking that trend was Mr Kipling, which ran almost twice as many deals as a year ago, with ‘save’ accounting for 78.4% compared with 65.2% in 2014. Across all featured space promotions, the proportion of deals utilising an x-for-y mechanic increased 2.7 points to 32%, while bogofs rose fractionally from 3.3% to 3.2%. Straight money-off ‘save’ deals remained the most popular mechanic, despite a slight dip in use to 48.5% of total offers.