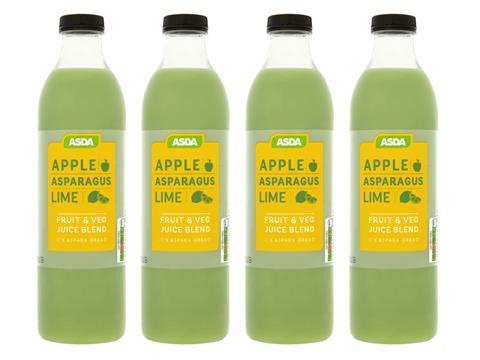 What: Apple, Asparagus and Lime Smoothie

Why: Smoothie value sales are up a whopping 18.5%, adding £24.4m to the category over the past year [IRI 52 w/e 25 February 2017]. Vegetable flavours are a growing trend, with cucumber, spinach and courgette featuring in recent NPD. This Asda own-label variant is part of a fruit and veg juice range that also features Red Pepper, Sweet Potato, Apple & Pear, and Beetroot, Apple & Blackcurrant variants.

Consumer verdict: Some of our consumers had reservations about the unusual mix of flavours and “off-putting” colour, but the drink still attracted a good level of interest before tasting, with the bottle described as “eye-catching”. On testing, the “zesty” lime was praised, and the addition of asparagus was described as “very clever”. While some shoppers enjoyed the “lovely aftertaste”, some disliked the “dry and earthy” flavour. Others felt the inclusion of asparagus made the product “unappealing”. Nevertheless, it scored well above the category norm of 38.