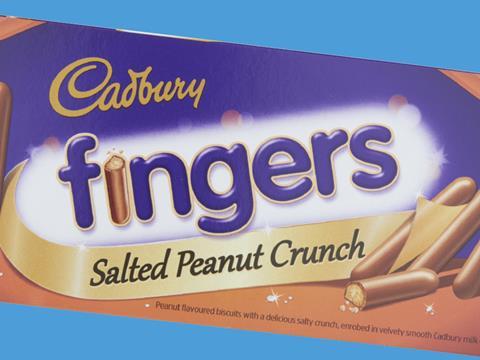 Why: Combining sweet and savoury flavours has been a popular trend, and Burton’s Biscuit Co this year took Cadbury Fingers into this burgeoning market, rolling out Salted Caramel Crunch and the Salted Peanut Crunch flavour tested here. Describing the launch as “category-boosting”, Burton’s has been supporting the products with a £1m marketing push.

Consumer verdict: Bought on offer at 92p, this 93g pack was rated ‘good’ or ‘excellent’ value for money by 65% of consumers, with many saying they would buy before tasting. Purchase interest was sustained after trial as taste lived up to expectations; testers felt this was sufficiently different to standard Cadbury’s Fingers to be bought as a change. Despite a lack of peanuts in the ingredients list, there was an aroma of peanuts when the pack was opened and the biscuit was often mistaken for “crunchy peanut”. Four in 10 testers said they would “definitely” buy the biscuits.